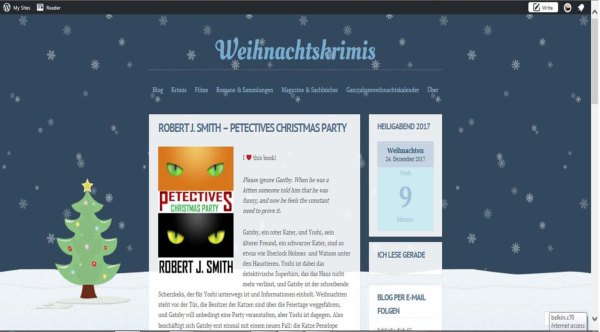 I recently stumbled across a review of Petectives: Christmas Party on a German website called “Christmas Crime” (At least that’s what Google translate says the title is). Almost everything is in German but I’m pretty sure that its a positive review. According to Google translate, Yoshi is referred to as a “detective superhero” and Gatsby is called “the writing joke cooked for Yoshi who gets information.”. So I may not be getting a strictly accurate translation but I’m still sure that its positive. If anybody out there knows German, let me know what you think. 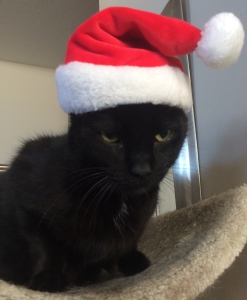 Gatsby in his Santa Hat

Merry Christmas from Yoshi and Gatsby, the Petectives! 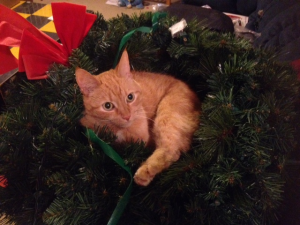 Yoshi hiding in the Christmas presents

Gatsby in his Santa Hat

Yoshi and Gatsby ornaments on the Christmas tree! 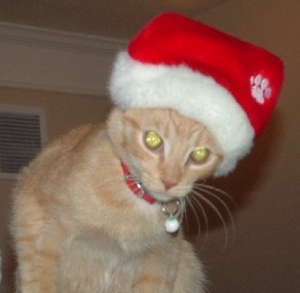 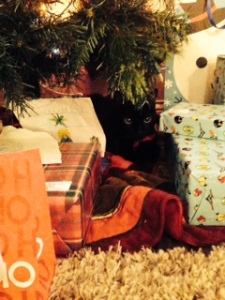 Yoshi and Gatsby on the Christmas tree!

A list of songs that I listened to while writing Petectives: Christmas Party. Some of the songs have a strong thematic link to the story, while others helped me set a scene or get into the heads of the characters. Forget all that, its Christmas music! Who doesn’t like Christmas music?

The Christmas Song – Nat King Cole: This was the first song on a Christmas album that my mom would play while she made Christmas cookies. It’s not Christmas for me until I hear this song fifty or sixty times.

I Heard the Bells on Christmas Day – Frank Sinatra

Sweetest Thing – New Voices of Freedom (featuring Adriane Mc Donald & George Pendergrass) – This Gospelled up version of the U2 song isn’t a Christmas song (Although it is from the soundtrack of the movie ‘Scrooged’). The song inspired the relationship between the Zabisco and Missy characters in Petectectives: Christmas Party.

Cool Yule – Louis Armstrong: All of the fun of the holidays in pure undiluted form.

Celebration – Kool and the Gang: Not a Christmas song but definitely one of the all-time great party songs.

Rudolf the Red-Nosed Reindeer – Ella Fitzgerald and Bing Crosby: Here’s how this version ends: “If you keep your nose a red, red rose. If you keep your beak all pink and sleek. And if you keep your snooze maroon because, You’ll go down in history.” Brilliant.

Christmas Is Coming – Vince Guaraldi Trio:This jazz melody is from the soundtrack to “A Charlie Brown Christmas”. That whole CD should be the sound track to Petectives: Christmas Party but it’s already taken.

Christmas Must Be Tonight – Robbie Robertson: Rock retelling of the Nativity.

My Favorite Things – The Supremes: I’m not normally a big Rodgers and Hammerstein fan but Diana Ross really sells this version. I don’t know if Ms. Ross actually likes schnitzel and noodles but I totally believe it when she belts it out here. 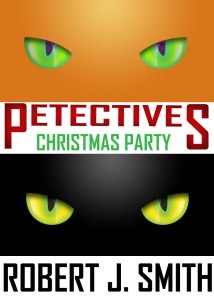 Just in time for the holidays we’re having a giveaway for three paperback copies of Petectives: Christmas Party. If you like cats, Christmas, mysteries or free books you may want to check this out:
https://www.goodreads.com/giveaway/show/73794-petectives-christmas-party

Yoshi and Gatsby on the Christmas tree!

A few years ago I bought these ornaments from the “Cats of Christmas” website (http://www.catsofchristmas.com/). I had accidentally busted an ornament of my wife’s late, cherished cat Monte and I was in trouble. I got a customized ornament that looked exactly like Monty and was much better than the one I’d broken. I was out of trouble. I also got a couple that looked like our current cats. The “Marmalade” ornament looks like Gatsby and the “Boo!” ornament is a perfect representation of Yoshi. They go on our tree every Christmas. I’m not sure what they’re made of but they look fantastic and they’ve held up great over the years. I don’t believe that they do customizations anymore but if you’re looking for out of the ordinary ornaments for your Christmas tree, check these out!